Here comes the wave/be the ocean

Hey-ho, it's February! That indecisive time of year, likely to be dampish cold, and then up to a heartening 40 degrees, leading one to sit outside of one's own free will, for an afternoon break, followed up by BAM! Winter storm! Due tomorrow afternoon, during which time I am supposed to briefly be in Canada. Though again, this is not a Buffalo-amount of snow, nor is it weeks of time with -- literally -- no daylight, so I have no reason to complain. The minimal point being: mid-Winter, it buffets us all about, tossing in just enough good for us to yearn and hope, before giving into another storm and more dark days. But slowly, slowly.

As my yoga teacher cautioned us against this evening -- don't think of life events as waves crashing upon you, happening to you. Think of being the ocean. The waves do not change the essence of the ocean, and their every motion is equally balanced by the opposite motion; it merely continues endlessly. So what seems to be so huge/insurmountable/shattering is only one small passing facet of life. Which does not stop me from being sick of the cold or irritated by all those things which get me, certainly. But I will say I was quite happy to return to yoga tonight. Life has been really hectic and this time last week I believe I was still at work; and the number of curses I have muttered to myself over the past two work weeks could have been impressive, except that they were merely run-of-the-mill invectives, hurled at devious powerpoint charts, or in disbelief at innocent instant messages which undid hours of work ~~ and whew! ~~ how easy to suck one's self back in, eh?

Anyway, Sondra was tremendously happy and chatty this evening -- she and her family are bird-sitting and the visiting parakeet is adopting the shrieks of the home-reigning cockatiel, rather than the mellifluous canary and she expects the owner is going to be less than thrilled by this. She also started talking about boisterous relatives ("I told you guys about *him*, right??" which, alas I had missed a couple classes, so I was in the dark.) These remarks were threaded throughout the practice, with us flowing through our sun salutations, downward dogs and hovering/trembling with our noses inches above the ground. A guy, who I haven't seen before, crashed to his mat with a loud thud. "Ohh, this feels SOOO GOOD!" said Sondra. She was clearly enjoying all the stretches, in between relishing more pet-sitting (burmese up next). "So! good!" Sondra exclaimed as we extended one leg behind, with the knee being the highest and the foot dangled off on its own. "Remember, if you're concentrating on your breathing, that's still Vinyasa. You're still practicing." The guy laying on the floor snorted. He laid there for most of the class, before graduating to sitting and standing. The rest of us attempted various pretzelly configurations; as usual I kept losing track of my breathing, and my mind spooled out daydream fragments before I pulled myself back in.

Who would have thought simple, concentrated breathing would prove so difficult after a few years, on and off ? Regardless, even such an uneven practice as I give it seems to make a big difference. It does seem to be one of the few things that really could benefit almost anybody who were to encounter it (with the likes of Ginger aside, who sports an irrational dislike of yoga, despite never having touched it with his pinky toe). My Mom shocked me a couple weeks back by saying they had signed up for a modified yoga class -- my folks, who have not done any kind of exercise class in decades, if I'm not mistaken -- so, hopefully, there will be more yoga converts in my family. Now, we only have to rope in the Sister...

It's a simple truth that the point at which we most need things like yoga, we feel caught in the hectic vortex of our daily lives. And too, sometimes it's a fabulous vortex, an exciting whirlwind. And so it is, with this neglected blog. When I came back from New Orleans with Compatriot a year ago; and then from China in August, I returned with a wealth of new experiences, plus hundreds and hundreds of photos, very few of which have made their way online. I could write about this! And this! And this! And life continues on, and your water heater breaks and the report needs to be redone and noooo, this other person has left the company -- as you wish to reflect and process, in order to boil things down a bit. 2013 has been quite surprising and rich so far! But not so much time to ponder all the new experiences. And I haven't discovered the magic formula to slowing down amidst the speeding up.

In lieu of that, a few happy snaps:

I should probably dispense with the weekends have been BUSY!! and just get down to it, eh? Last weekend's seeming wealth of *two* scheduled studio days were foiled by: myself, some needed weekend work hours, and my headlights, which had mysteriously ceased to work the preceding Friday...

"Sounds like a blown fuse. Just replace it," advised a friend from work.

"What? NO. Just get your owner's manual, find the fuses, take 'em out and pop the others back in~"

His eyes bugged out, as they do, when the other person is obviously being ridiculous. "YES: It's SO. EASY." He had tried to get me to take a beginner's car maintenance class, which was a tremendously practical idea, but four hours claimed every Sunday? Seemed punitive.

Back at home, I girded myself with the manual and my little flashlight. PiC*, who seems to possess the same degree of fixitness as I do, texted: "Is he crazy? Just take it somewhere. There must be a gas station or mechanic nearby."

*Partner in Crime, shorten to Crime?

Meanwhile, my learned more fixity neighbor pulled out my [perfectly fine] fuses --with his needle-nosed pliers. "It would be easier if I had a diagram of your circuitry." He floated several possibilities, all of which were over my head. Mechanic it was. I gave up quite easily and started watching Hysteria  (7.2/10.0 IMHO). About half an hour into the movie, my neighbor calls (who, if you're a regular reader, may recall him as the mocking-but-helpful lawn mower introducer): "Listen, I've been reading some Subaru forums and I think I may have an easy work-around..." Which sounded promising, given the speaker, but for the part that follows you can simply envision part of a flow chart: arrow to -- > Did the fix work? ---> No. --> Take it to a mechanic. And so it went, but not before the two-afternoon studio weekend, wherein I barely got through the annoying initial nothing-is-printing-well part before it was OMG it's almost dark, and country roads! Flee! As I drove, kind people periodically blinded me by flashing their headlights into my face. Yep, got it! thanks! Though oddly, it seemed like a less caring world when I'd pass a string of cars, none of whom cared enough to blind me.

Before I drove out initially I got a curious voice mail from Maestra, warning me that there was a rabbit in the studio. Don't you wish more warnings fell along those lines? But they don't. Rarely are we cautioned against the presence of chipmunks, lavender meringues, baby hedgehogs, no. 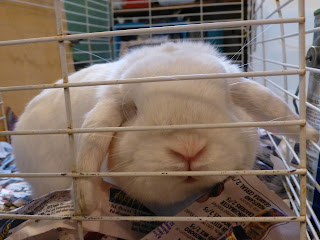 The bunny was waiting, as promised. He seemed a bit anxious because of my presence, but he may have only been going about his normal bunny business. Sudden bounding hops across his small space,  continuous paper shredding, bar gnawing. nose wiggling.

I talked with him more than I should say, as immediately after I first inked my block, it became apparent that more wood strips had defected from its surface -- and I had to cool my heels, waiting for wood glue to dry. 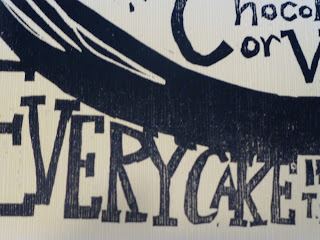 Between the first weekend and last Sunday, even MORE wood defected! Not quite sure why I have had SO much block deterioration early on, but at this point, I'm just rolling with it. RE: the change at left, at least it's a clean absence. I fear gluing would only produce a muddied new variation. Obviously, I was going for the French spelling...