Have been noodling around, perusing cookbooks. I don't know what to bring for Passover dinner, though the "some vegetables" suggestion doesn't seem, on the surface, a mysterious or challenging route. Orange and beet salad? But possibly better to avoid, what with the beet-horseradish possibility. I'll be working that day and maybe even quite close to dinner time, so something that I make the night before would do better. Hmmm. Hmmm. And then there's the "Ladies of X street" gathering on Sunday evening, since one of my friendly neighbors*  is without her husband for the weekend and is fronting the very occasional we-should-know-our-neighbors-better directive. And it's about time for this, as there's definitely fresh blood on our street. But who's behind the front door? We all huddle inside our houses, humbled by the weather, crabby from the work day (projecting). Except for neighbor's husband, who snow blows/shovels many a neglected sidewalk, and waves merrily as you drive by, saint that he is. But the point is: do I know what to bring to the Sunday potluck, either? No, I do not. While I have hundreds fewer cookbooks than Compatriot, I certainly have enough to find something suitable. Perhaps the proper recipes do not yet wish to be found. Ironically, the notion of Easter Egg hunting for the perfect recipes spring to mind.

*neighborly friends -- she was one of less than five folks I skyped with when I was in China. And we still sometimes skype, which is ridiculous, as we live across the street and a few doors down.

Overarching indecision, or nostalgic mix, hard to say. Because Easters past have been springing to mind recently, more than they usually do for me. Not being from a family of practicing faith, this did not usher in somber thoughtfulness or remembrance, rather, like so many secular peers, it meant Easter baskets and egg dyeing. I always loved the dyeing, though the blowing-the-egg-contents-through-a-needle-hole I could do without. Luckily, we normally went the hard-boiled route, so.

Special old white chipped cups were reserved for the dying; they were kept in a cupboard downstairs. They had clean, triangular lines to them (I think they were from a contemporary Japanese dinner set) and just-barely-there dye lines from years past. I loved seeing the pools, with their fizzing dye tablets, to which Mom would add vinegar.  A host of colors in each cup on the tray, so deep that it was often difficult to tell purple from blue from green. lowering the dainty wire circles into them, with the buoyant egg, so starkly white. Always the overlapping of colors, the deeper hue or --wonderful!-- luminous interplay of color  --or ugh -- overdyed muddiness, richness rendered drab. The sturdy, beautiful woven baskets had been around from before I was born -- when had they bought them? My parents were older when they started their family -- were they in their thirties when they picked them up, in anticipation of a family? I remember one, especially grand, with a rolling rattan lip, reminiscent of a cornucopia. We certainly weren't wealthy, but think of it, to have these special things, for one day a year! And to have that much space, to easily store them away, all the better to forget them until the following year.

The house being somewhat chaotic, it was well suited for hidden Easter baskets. While our mother was the paper doll drawer, and the mistress of most things art related (outside of photography, which was my Dad's domain), my father always drew the treasure map to finding the basket, by some unwritten rule. He was not above trickery, being at times an unreliable narrator, so it was often with lingering wariness that I trudged around, holding his hazy sketch aloft as I scanned the various rooms for some corresponding point or landmark.

So on that note, perhaps it's less surprising that I bought a pretty little chocolate bunny for my Mom's late birthday package. Along with a certain degree of indecisiveness, I'm also experiencing delayed awareness of birthdays** and other missed deadlines of lesser importance. Word Collector, I'm taking a page from your package book: I'm going to nestle the chocolate bunny in a pretty little watering can (birds on it, Javier, like in Portlandia!), along with a handful of See's chocolates(oh how I love See's), I think she'll be as thrilled as I was, when I opened that kettle last year! The bunny's foil wrapping is quite clever, its nose is pert and eyes freakishly large. It will certainly suit her strongly developed sweet tooth. Luckily, my mother is allergic to the Internet and so will not see this.

**Oh, my dear old friend, Queen of Mystical and Evil Embroidery, Savvy Brooklyn Denizen and menfolk wrangler, lame apologies for letting your birthday pass. Something awaits you here, though I discovered it is not in the pristine condition I once thought. More cool things need to join it. I hope the day was lovely and that Spring is also dragging (its sorry-ass heels) your way, as well.

Well, on that note, I am hopeful for Spring, and for the awakening year.

In Ann Arbor, a brand spanking new independent bookstore, Literati is going to open very soon, on some mysterious day in the near future -- if you're intrigued, find them on Facebook, because they're better at updating there. Two of my favorite Borders alumns are working there, so I'm already excited! Let us know about the opening, hmm?

And! Also very soon, Festifools! Yet another year has passed, wherein I thought to volunteer with them, but it did not come to pass -- but in any case, that's going to be a visual feast, and very soon.Looks like the like Fool Moon will be Friday April 5th. Definitely worth a visit downtown -- and seems to get bigger every year.

On that note, I'll take my leave. I have presents to wrap, plus a geese print to send to "Metchley Lane" -- and doesn't that sound like it has character to spare ?
Posted by M at 10:44 PM 2 comments:

A Hazy Week in Review

You think to cook a meal for lunch, which burns, but lacks discernible taste. Each sneezing fit sets off a ripple of chills; you pause and debate the merits of sofa or bed as the next landing strip. You lose track of the debate, but find you are already somewhere anyway, with a blanket, though you alternately resent and feel fondness for the blanket. You watch vampires and shady people getting lost/good people getting mixed up with shady people getting kidnapped and knifed or being returned to their parents. Everyone has hidden motives. You try on your junior prom dress and think, "well, this might work after all." Your new boyfriend breaks up with you and then doesn't understand why you're upset, acts like nothing happened in the first place. You are told, adamantly and self righteously, that you "have NO ANSWERS," though it would seem more accurate to say that you have numerous displeasing answers. The dog says you have issues and the clementines have grown mealy. So perhaps the week has been a little more seamless than it should have been, but time is carrying you along.

{Reminds me, too, of one of my oldest friends who has always had a lush, prolific imagination. It was only natural that she was especially prone to hallucinating while feverish. One evening, her parents only noticed she was ill after she began quarrelling with her peas at the dinner table. They felt her forehead and sent her to bed.}

"I'm going to Arbor Farms for you anyway--"

"I don't trust those zinc lozenges you have. It says they have zinc IN them, but doesn't say how much--"

"oh, sure" we peer at the label, which does seem noncommittal.

"I don't know this zinc's history! I don't know its background, I don't know his parents!" Javier, he riffs. He looks further down. "...and 'a few nice oranges.' But only if they're nice." Is he confirming, or mocking?

{*previously referenced as partner in crime, a label with a short shelf life. During a pause in a recent skype with Word Collector, she asked, "So how's Javier?" So odd, the memory. This name has no connection with him whatsoever, doesn't speak to his personality. We both laughed and wondered over it. So, he with the irrelevant nickname, versus cardboardy veering to saccharine nickname.}

The organizing is done, and then he's off and then he's back, swooping in with a few bags and then off to the rest of his packed day. He's in almost constant motion. The rare person  for whom pacing does not indicate being distraught. He is merely working things through, puzzling them out, and his active, restless body is indicative of his active, restless mind. But now he is gone and you return to sleep and then to sofa/bed. How could you have forgotten how wonderful Bob Ross is? So hypnotic, with his happy trees: "And maybe in our world, let's have a little rock here. And maybe there will be a smaller rock, right next to him, so he doesn't get lonely." Yes, you murmur. Yes, this seems to be a good way to make a world. Flecking the paint thinner, watching a waterfall brushed into being, better than watching a fire. Which would be too hot to watch anyway. Everything is hot or cold, with little warning beforehand. 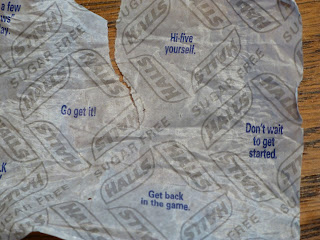 The minute you fully lay down, the cough returns in full force and hangs around in its juddering way for minutes or hours. Even so, bed and sofa have the greatest appeal.

The cough drops have grown more talky since the last time you have sucked them down. The first one read "Tough is your middle name," which was kind of nice if not false and a bit gung-ho, but the more you look, the more corporate can-doey they feel. "Don't try harder, do harder"? When you're sick? 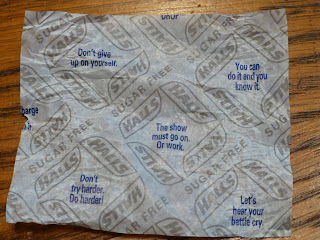 "Let's hear your battle cry?" Seriously, who wants that? "Don't give up on yourself" seems an odd one -- as if being sick were an indicator of weakness and would naturally lead one into despairing of one's ability to succeed at all? Reading too closely, possibly. But the Bob Ross painting world seems a bit more conducive to healing than the manufactured gumption of the wrappers.

And so it goes. The weekend features YoYo Ma, a nice meal which I may or may not be able to taste; Javier, hopefully lots more sleep and a lot less coughing and ear/sinus pain. Dancing to a live band? Sound lovely, but very energy-intensive. I hope to return to more printmaking soon and hope to pop onto the blog in an increasingly reliable fashion. I did number the first version of Cake Maelstrom, which you can see here; and a few other small editions on different colored papers are waiting patiently to be numbered and signed. Hope Everyone is doing well and is fighting off the cabin fever of latter day Winter. Take heart, Spring is almost upon us!
Posted by M at 3:22 PM No comments: