"I am READY for my SHOWER!" said the 4 year old, appearing naked and in her helpful guise*, as I attempted to wrench my head from my pillow. I primed her last night that we would be doing things a bit differently today: no lollygagging, but straight from bed to shower, to breakfast table**, and off to an early start at her preschool.

"I AM GOING TO BE AWAY FROM YOU ALL DAY TODAY," she announced experimentally. I agreed, glancing at her through the rear view mirror: was the veiled tone was one of pride or worry? "So. WHY am I going in the MORNING, when you always...APPRECIATE the afternoons?" I often love the feeling of active translation occurring in conversations with her. It was true, she normally goes in the afternoon, but what lead her to choose and emphasize appreciate? I told her I would be going to see the Art Fair all day and I would be walking A LOT and it would be hot; and that I was going to meet my friend Stephen's twin Kevin, so we could enjoy the art fair, while thinking about Stephen (see my last blog post, if confused).

Meeting at Ignatius Hats was perfect, as Stephen has brought literally hundreds of friends to meet the Virginian millinery team of Joseph Ignatius Creegan and Rod Givens. My Ignatius purchases predate my friendship with Stephen, but I have several mutual friends who own their hats at least partially due to his encouragement. If you like hats at all, it's pretty difficult to not just try a couple on, and then of course, take some incriminating photos. "You'll buy one, though right," urges Darcy, as if it's the only decent course of action. "You know, in honor~~"*** She wears her vintage Ignatius hat, and it feels more organic, less cartoony on her, as it melds with her personality. I make no promises, as there is much to see in the next few days, and really, Stephen would approve of any art purchase I had really committed to. Which is not to say that he would agree with my taste, but yes, supporting fellow artists and surrounding one's self with visual fuel.

Other mutual artist friends arrive and mill around a bit before we go off to explore other booths. We visit some of Stephen's favorite artists, including ceramicist Nancy Gardner,  printmaker Nick Wroblewski, and painter Debo Groover. They all greet Kevin warmly, express condolences, and we look at new work. "How many years ago were you featured artist?" he asks Wroblewski, who sighs and murmurs: "Maybe 4 years ago?...Your fame really PEAKS...and then just declines~~" He hangs up a "Keep Your Wits" sticker at one edge of his booth. I have the privilege of meeting more Kerr family members and other retired teachers who taught with Stephen decades ago, and who have gone to the Art Fair with him every year. Kevin speaks of collectors who are at sea, having broadened their collections under Stephen's guidance.


In between arting, I get little glimpses into Kevin. We have met three times max, but never with an opportunity for substantial exchange. I remember from Stephen that he ran a Dairy Queen for many many years, but otherwise? Hmmmmm. I just hadn't seen him very much.

And no wonder: he spends 7 months out of every year in the Anna Maria Island, just off the Florida panhandle. "Oh, you'll enjoy this. The cafe I always go to says 'open at 7,' which really means it opens...whenever. Well I complained enough that they eventually just gave me my own key and said fine, you go when you went to. And so I did, and I open it up, I make coffee, people come in, and I know everything that goes on in the Island. Everything. But only coffee, I don't do the food. Just the coffee." He clearly shares his brother's love of good stories and droll asides.

And what about Kevin and art creation? He has talent, but not the patience. "If I can do it in 5 minutes or less, I'm good." His next anecdote points to a flow state: he speaks of an old log cabin up north, and being sent out to mow the lawn...and then being called out for not having finished it, much later. "...But look at these beautiful stars I made out of twigs and branches!...That's what I do."  He shows me a couple of phone shots of recent twig and button constructions. My daughter would A.) be convinced fairies had taken up residence and B.) be compelled to dismantle them all. And then cry about it.

Elsewhere within the confines of the Original:

Printmaker Stanley Leonard praises Nick Wroblewski and credits him with his ability to register prints -- that is, to accurately match up colors from multiple blocks to create the finished image.


We admire the encroaching bear in Dylan Strzynski's "Won't You Be My Neighbor?" painting and he deadpans about his shifting focus: "My [landscape/house] paintings are all kind of lonely. And I was thinking: People like animals. And *I* like animals~~....But it's hard because any time you make a change, a lot of people are like BUT I WANT WHAT YOU WERE DOING" We all do a little sympathetic head bobble ("ehhh, it's a balance~~") All of his pieces have a nice degree of texture to them, but the bear piece is especially satisfying. The bear itself is layered-on tar paper, the picket fence another layer, and staples punctuate the grass.


Ceramicist Robert Hessler (booth IN267) has a wonderful counting series, all about meditation: each dot is a breath, each dot counted, and the final tally becomes the title of the piece. Whew! 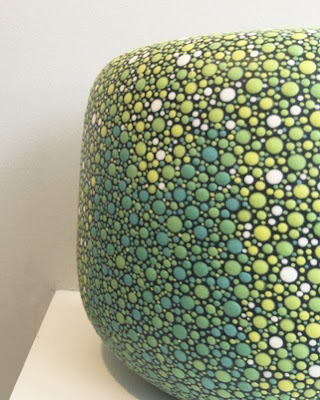 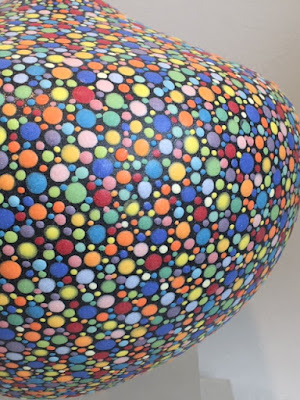 *The helpful guise didn't extend through the meal, wherein she allowed her banana yogurt to slime back out of her mouth, and directly onto the table, before explaining:"My body told me to do that."

**there's no separate breakfast table, but maybe I'll invent a nook. With one black pleather banquette curving around a round formica table top. With golden sparkles in it.

*** I write that lightly, but I am NOT making light of it. Darcy is serious and if you knew Stephen, you'd know it would be a fitting tribute.

**** You design the poster for the Original fair, and versions of your artwork are artfully plastered across t-shirts, baseball hats, scarves, etc. Monetary prize, as well?
Posted by M at 10:14 AM No comments:

The Art Fair Cometh -- But without its Best Town Crier

Each Summer, my relationship to the Ann Arbor Art Fair changes a bit. My stamina and crowd patience vary, along with the luxury of meandering time. Still, something in me begins stirring in early July. Before I suss out official websites, prior to reminders of limited wall space & financing, the musing starts. Which favorites will return? Which streets hold surprises, and how long before people resentfully mash into too-small store fronts, waiting for the end of a downpour? 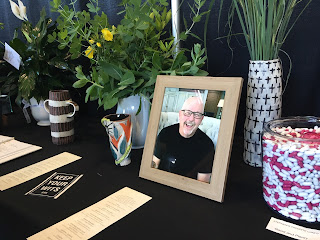 This year is bittersweet, with the recent passing of Stephen Kerr, beloved arts community supporter, artist & retired art teacher. Ever the champion of the Ann Arbor Street Art Fair -- "the Original,"* one could reliably spot Stephen orbiting the info table/metallic robotic busker or any of the new or returning artist booths. Did you glance at a shirt? Hed readily sell you one. Did you seem too hurried? He'd slow your roll. Otherwise, how could you be sure you'd seen everything worthy of being seen? The name of the game was appreciation. Discernment, yes, but also delight. Wry or wicked humor. Surprise. We always traded the names of artists who excited us. Sometimes Stephen would materialize as I surveyed an artist's work ("Did you know? He puts serial killers in all his cereal bowls, aren't they wonderful?" "Did you know, she has work at MOMA?") At other times, he'd startle me* with a breezy introduction to the artist: "Oh do you know Marian, she's a writer, I bet she'd write about *you*, she wants more things to write about~~"  That's the way he worked: seeking out the joyful, connecting people through that, & spurring people onward.

Stephen appears in a couple of my past art fair posts --> here.

I never had the pleasure of being taught by him in an "official" capacity, but the (glowing) consensus was that he held you to high standards, helped jog you outside your comfort zone and far, far beyond your own perceived limitations. Stephen's beautiful memorial service was a testament to his, his wife Mary and their family's shared generosity of spirit and love.

The opening poem was read by a grand nephew:
Artist Chris Roberts-Antieau, said:"I know he believed in me and so I was able to believe in myself." His nieces' tribute opined:"An ordinary life is heroic in its own way. And that was our Uncle Stephen...He embraced a life of meaning...didn't drape himself in ego...He lived a life of good intent." The service underscored the astounding amount just one person can do with a life, and how far it ripples out.  To never lose sight of how interconnected we are, to pursue delight & meaning~~!

Kevin, Stephen's twin brother, handed out stickers bearing his motto, which I imagine most of us hear in his voice, as he frequently concluded conversations by uttering it: 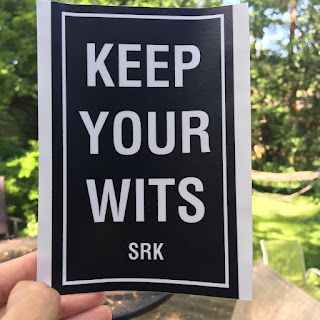 Naturally, this post falls far short of the fabulosity and wonder of Stephen -- and how multifaceted he was. I just know in a few weeks, maybe I'll cross paths with you at the art fair(s). Seeking out old friends and new. Hoping to be amazed, or amused. I know when I experience this, the first person I'll want to tell will be Stephen.

*As all fans hasten to add,  lest we forget the mammoth fair is actually four very differently juried fairs.
**I startle easily.