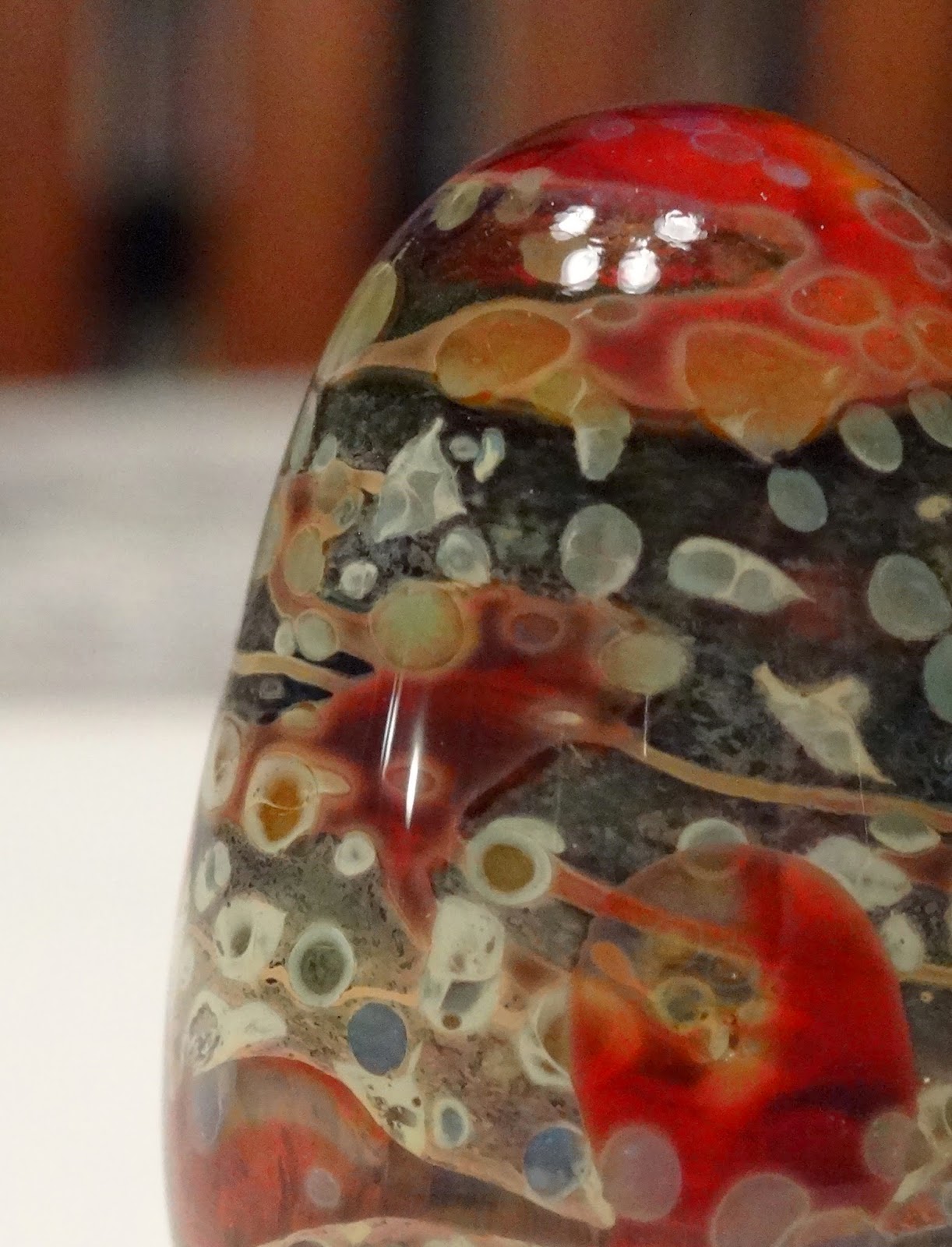 Oh bright, shiny dining room!...or not, but it is, at least, less dark than my study. The table lamp dimmed and gave a minor crackle, followed by a loud *pop* and then extinguished. Disconcerting. It has one of those strange coiled light bulbs that supposedly last forever and a day, but forever came rather quickly and now it needs to cool off for a bit. So how're you? Any tornado sightings? We had a warning in our area, around 4 PM which succeeded in distracting several of us to varying degrees, including our Russian colleague sitting across from me (visiting from one of our other offices), who inquired whether this was a frequent occurrence. Our answers descended into anecdotes that failed to reassure; she arched a single eyebrow at each of us in turn: it's possible that at this point, she has written Michigan off entirely.

Other than that? Not much excitement, though with the relatively sudden warmth (see also: tornado), most of us have emerged and are noodling about a little more...

I made it to the tail end of Water Hill Festival, a local neighborhood-generated music festival of local talent performing on front lawns. Maybe 40-some acts, crowds of pedestrians with strollers and dogs and some teens and more middling folks, and toddlers swinging about until they fall down. Also, a few cars inching along, with drivers who forgot about all this, muttering to their steering wheels. Beautiful day for it! My first time attending, and sadly, since I headed back from Detroit a bit late (a lovely weekend with Javier), I only caught a couple acts. I had earmarked "Magdalen Fossum" as a past years' favorite on my wee printout, but didn't know much more. She appeared to be young-young-young, but I eventually decided she was probably a super-young looking college student. Nope! She is, in truth, even younger -- 13 or 14.

She has a lovely honeyed voice, with a nice little warble to it, utterly charming. I took a video shot of part of her rendition of Blue Moon, but crowd patter and my own lack of practice don't really do her talents justice. Luckily HuffingtonPost has a great article on her-- listen to  Fossum's version of Imagine here.


An online blurb about The Moaning Frogs -- a young saxophone septet -- made them out to be goofy fun and they were. When I strolled up, they were in the midst of a dixieland-cum-polka sounding piece. This was followed by America the Beautiful, which nicely sequed into This Land is Your Land...They proudly unveiled a jazz mash-up composed by one of their own of Charles Mingus and Booby Timmins, called Mingus Moanin. A close with the crowd rouser "Hail to the Victors" (University of Michigan sports fans abound) and they called it a day. 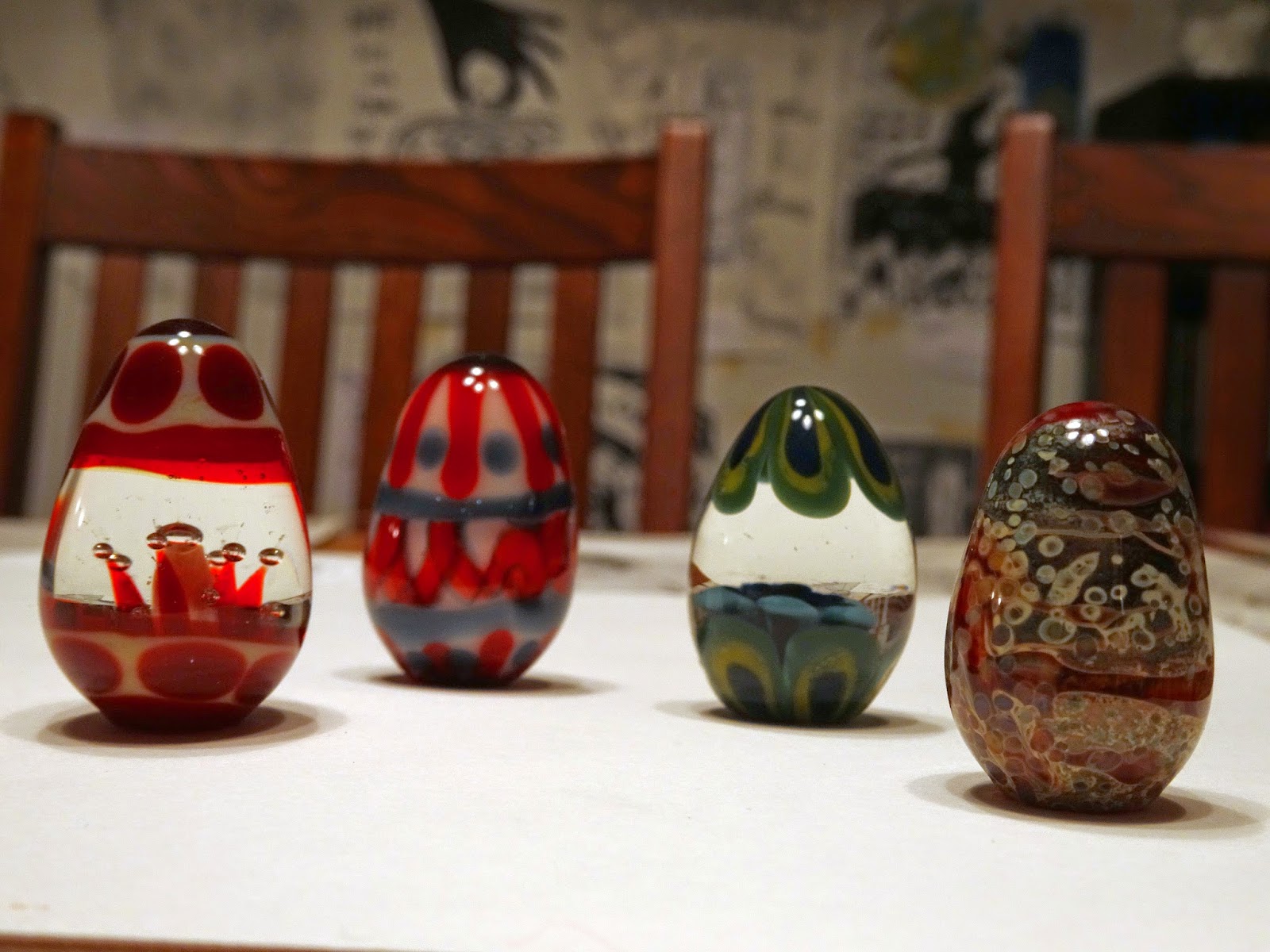 Somewhere in between the two acts, I chanced upon a rickety table at the end of the driveway, with a woman and two guys seated behind their wares: drawings, paintings, and glass. The swirly glass "peace pipes" lined the front of the table and were clearly the focus, but I was drawn instead to several small glass eggs. Did they take credit cards, do they have square? Noooooo, they were just TALKING about that, noooo. They alternated between looking bored and hopeful. This wasn't an event with crafts or art outside of the music, so it was more of a my-friend-lies-in-this-house-what-could-it-hurt move on their part. In a few years, who knows what this festival will look like? I am told that the crowds have grown substantially from just the year prior.

The glass maker (Gidian Maker) agreed to my sending a check in the mail; and before the week was out a wee box with lots of bubble wrap arrived at my doorstep. And aren't they lovely? An inner voice groused: Yes, yes, very nice, but did you really need them? Don't you have enough stuff? No and yes. A new friend enthused about the house that she and her husband just closed on -- and the experience of walking through the empty rooms, with absolutely nothing in them. Her description almost made me feel wistful. Also a sense of distance: oh, that? that's another country. It's difficult to remember the last time I felt that in relation to a home -- both that sense of pure potential and freedom of space. My living spaces always feel full. Plus, I'm kind of a magpie, my head gets turned, especially by things people have made*.

{*"and books," Javier would likely say, were he here. But he's currently en route, probably ensconced in some podcast or other. That, or he's already parked out front, but has been sucked into emails or twitter on his iphone. This is not unusual.

Sample texts:
me: Hey what's your ETA? Where are you?
Javier: I'm in your driveway.}

Obviously, the experience of art is not in the buying. But I'd be lying if I didn't admit to an impulse to own. As specious as that is, right?
But in terms of justification, it's an easy sell...