...But if I leave now, I'll miss overhearing the tarot readings. 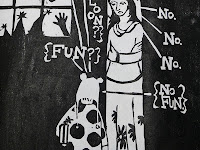 ... And a fine Saturday to You! The Michigan Theater audience at the morning showing of "Dear Mr. Watterson" was suitably fannish, short of anyone carrying stuffed tigers or dressing like Calvin. I always loved the comic strip* and it happily reentered my life with a daily strip courtesy a Facebook group, so I was keen to see this morning's Cinetopia offering.

*According to comic historians interviewed, the person who has been exposed to Calvin and Hobbes and dislikes it does not exist.
While embodying both, the film is definitely more of an appreciation than a documentary in the strictest sense. It reminded me of a college course I took (at Smith? Or Mount Holyoke?) It was a survey of shorter American fiction by women, and the primary text was one of those 4 inch thick paperback tomes with barely a spine, with nearly transparent onion skin paper. The professor spent her time lauding the merits of each short story or poem assigned. The students grew restless after a few classes. Young women groused to each other, "Wow, this is so great, that's so great...I could do this on my own~~" It was implied that the professor was lacking in intellectual rigor, or was daft/pollyanaish. This wasn't entirely fair. Explication was involved, but the analysis unfailingly had greater appreciation as its end-goal. I have thought about this periodically ever since, as my more puritan strain echoed their sentiments and chaffed at so much niceness: how could that be making us think better, stronger, or potentially improve what we would put out into the world? Too soft, too soft. But perhaps not?  Can thought-out appreciation be as valid as ferreting out the inner workings and weaknesses?  A more enjoyable mental place to inhabit...In any case, Dear Mr. Watterson falls in the former camp, and this approach seems to suit a comic strip which was all about a boy's imagination and the joyful flouting of authority...

Regrettably, the quite private Bill Watterson himself never makes an appearance; before going today, I knew nothing about the cartoonist himself -- which was always Watterson's intention -- so, some point of me held on for awhile, thinking that we would hear him speak *a little bit*, you know, as long as we were patient. No dice!  Excerpts from a graduation speech Bill Watterson made at Kenyon College is a nice chaser if the movie left you curious to hear more words (slightly more directly) from the cartoonist's mouth. He talks about not selling out, the importance of quality versus mind-numbing relaxation, following your own happiness/interest instead of answering societal expectations:

"If you indulge your natural curiosity and retain a sense of fun in new experience, I think you’ll find it functions as a sort of shock absorber for the bumpy road ahead."

Meanwhile, it's a quiet afternoon at Crazy Wisdom Tearoom. The incense from downstairs makes my eyes a bit achey, but the black coconut tea is lovely. The main counter person wants to talk about polyamory with coworkers and friends who happen through. "Is it just societal conditioning that you're supposed to be with one person that explains my discomfort? ...I don't know. But then, a couple days after he brought it up, he said *he* was doubting it." Some offer anecdotes, other theorize. Barring the nice smokeless atmosphere, better sound system and lower angst level, I could be sitting in the Bridge Lounge of ole Hampshire College...

Probably time for me to head home and finally determine why my lawnmower won't work: this is my bargain -- try new gas, attempt a new spark plug and THEN I can transfer another design. That's the deal. 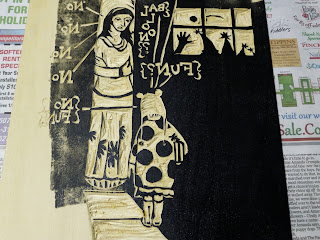 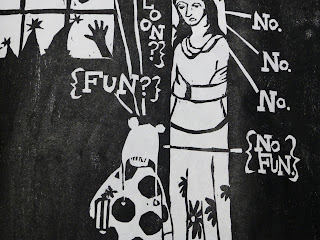