Which honestly didn't do too much for me. While I can appreciate the clean lines, they leave me a bit cold. I imagine these initially appalled and electrified members of the art world, but decades later, elements of each have permeated design to the degree that they merely seem vaguely familiar.

Noguchi apprenticed under Constantin Bracusi, which to me explained his pared down, abstracted style, though Brancusi would have rejected my impression:

"There are idiots who define my work as abstract; yet what they call abstract is what is most realistic. What is real is not the appearance, but the idea, the essence of things." (see Wikipedia entry )


Idiocy aside, this didn't help me understand Noguchi's inclusion in a two person painting exhibition at the University of Michigan Art Museum. I had been tempted by the banner I saw during art fair, which featured a Chinese ink painting of monochromatic crabs: they were simultaneously fluid, free, and perfectly precise. So how did he fit into this? The expiration date listed on the banner (September 1st! You still have time! But only a teeny tiny bit) spurred me to mash a visit into an already full weekend.

*****
*Props to Philly Art Museum -- nice anecdotes accompanying photos of their collection. The above sculpture, of one Mademoiselle Pogany, was exhibited at the 1913 Armory Show stirred up attendees -- one outraged critic likened it to a hardboiled egg on a sugar lump. Check out the link, you can read about Princess X, which someone, either Picasso or Matisse (my vote is on Picasso), deemed a phallus; Brancusi said NO it's femininity idealized (wrong angle, you're looking from the wrong angle!). My vote is on: phallus. People who think museums are like mausoleums and art is dusty and irrelevant have no idea how many juicy stories abound in the art world! Passions run high, people! We've got your demanding, idiosyncratic personalities RIGHT HERE!...Ahem.
****

At the age of 23, Noguchi had already won a Guggenheim fellowship to study in Paris (where he worked in Brancusi's studio); in 1930, he is a measly 26 year old. He is briefly passing through China within a larger trip, when a friend of his, Sotokichi Katsuizumi, a Japanese businessman and collector of Chinese paintings, shows him some of his 30 Qi Baishi paintings. Noguchi is blown away. Qi is an elder, renowned master ( both of paintings and seals, an artist's individual signatory mark); he doesn't speak English. Noguchi doesn't speak Chinese. No matter, Katsuizumi introduces them anyway; they become friends and Noguchi extends his stay to paint with him for 6 months!

While the traditional master-apprentice role has the youth copying the work of the master as precisely as he possibly can, without deviation; this was entirely different. Noguchi observed Qi's techniques, and then adopted them for his own ends, using broad, heavy swipes of the brush to convey the energy and mass of the nudes that were his focus. The UMMA text theorized that Qi may have been okay with this, due to being largely self taught himself; he came from peasants and learned to paint from a book he came across. As well, Qi's chosen subject matter was "more humble" than those chosen by the reigning artistic community -- (i.e. new born chicks, rakes and brooms, vs. soaring mountain tops). UMMA quoted him as saying:

Going a bit far for me, but an interesting point of view. Save it for your next cocktail party!

Elsewhere, I loved the words accompanying the images. According to Qi also, no painting is complete without a poem or a seal. And so there were lyrical blocks and ponderous words neighboring Qi's painting scenes. A painting of fish bore the following text {note: the words for "fish" and "remaining" are homonyms}:

"I painted buffalo for my disciples. However, my family asked me to paint another, so I painted this one. This makes me sigh, because one should paint to amuse oneself."

A painting done and mild protest registered, in one fell swoop~~

At the end of their time together, Noguchi had completed over 100 Chinese ink brush paintings (referred to as the "Peking Drawings").  Several of the exhibited nudes were of mother and child or men and boy wrestlers; most were quite large in scale (~9 feet; he laid the sheets of paper across tables or on the floor). The gestural lines were elegant and full of life; those on the livelier end reminded me of the freedom and joie de vivre of Matisse figures. Sometimes, they were imbued with a sense of calm and dignity. 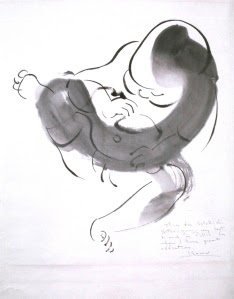 The Baby Kakemono scroll above was one of the smaller ones (maybe 18"?). The handwriting reads:

This is to Sotokichi Katsuizumi my best friend in Peking for whom I have great affection. -- Isamu

At some point later in life, Katsuizumi called Noguchi "the most lonely fellow I ever had known."

Want more Noguchi? The ArtStory.org has a fascinating overview of his life, work and influences here -- though his short-though-meaningful experience with Qi Basihi is sadly absent from the entry.

If you read further, you'll see that Isamu Noguchi's primary emphasis was on creating art and art spaces for public use. To bring him back to home ground, he created the Horace E. Dodge and Son Memorial Fountain in Detroit's Hart Plaza, which will be teaming with people this Labor Day weekend, for the annual Detroit Jazz Festival.

My favorite artist quote from ArtStory:

"[The visible world] enters our consciousness as emotion as well as knowledge; trees grow in vigor, flowers hang evanescent, and mountains lie somnolent -- with meaning. The promise of sculpture is to project these inner presences into forms that can be recognized as important and meaningful in themselves."


[The visible world] enters our consciousness as emotion as well as knowledge; trees grow in vigor, flowers hang evanescent, and mountains lie somnolent -- with meaning. The promise of sculpture is to project these inner presences into forms that can be recognized as important and meaningful in themselves. - See more at: http://www.theartstory.org/artist-noguchi-isamu.htm#sthash.yUDrNJQx.dpuf

It's About That Time 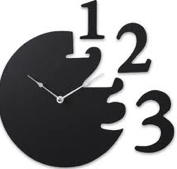 Every clock in the house tells a different time. The retro brick red clock above the sink is just hard enough to reach that I didn't drag a stool over promptly when it stopped; initially it provided a point for internal criticism, and then, minor shame when people happened through and remarked upon it. Somehow none of it penetrated enough for me to actually change it; and now, when I come in the kitchen side door, I still glance up, only to confirm the reading through its bubble face: Oh yes, twelve minutes to eleven. Right. The other ones are cagier; I know that they run slow, for their own mysterious reasons; and I tend to them periodically, when the slippage grows too glaring. But still: why? And why bother, when you have your cellphone, right? The cause of myriad tanned wrists and cast aside watchmakers everywhere. The cellphone which briefly glows bright around 2 or 3 AM, as it disconcertingly connects with its Mothership. Unfortunate when you forget to turn it face down and are sleeping fitfully.

If my house is a time warp zone, my internal clockworks -- and by extension my calendar time -- is likewise experiencing disconnects. To wit: some part of my brain has kicked into the Reckoning Overdrive that normally bombards one during New Year's Eve/Birthday times. WHAT is the import of your life? WHAT, the measure of your years? WHY fritter away time on imaginary TV characters and every other silly filler item, when there are things you could grasp, things to be made, achievements to check off? But really, if all you wish to do is check the box for a task done, was that a worthy marker in the first place? And to cap it off, if all one does is bat the ideas back and forth, that amounts to less than nothing, as one is aware of unused potential, but has not GONE FORTH. The armchair traveler will remain ever safer than the actual traveler. I'm sure the murkiness of this paragraph has already clued you into the fact that I clearly don't have a plan.

Right now -- today -- Saturday -- I'm opting for the "big changes happen in small steps" school of thought. Maybe I'm letting myself off easy. But today's phrase is: more organization, in service of freer creativity. Incongruous? I sat down to blog a few hours ago. It has been a long time, and so I thought, well maybe a photo based post: not too much, just Short and Sweet.*

*HAH! you say, if you know me. AS IF. I know, I know, but this is frequently my intention, believe it not.

But then I found myself wading through the pictures folder. Hundreds of jpegs, very very few ever posted; and more on my camera. Tons of folders with somewhat helpful descriptions. I started to organize. I continued to organize. I could still be doing this. I could still be doing this, come twelve minutes to 11 tonight. Or tomorrow morning. And so many of these images were also meant to fuel or buttress blogging, up to a year ago. I know that many have spurred googly research (what's this muralist doing now? are there videos of this jeweler's unique approach?), the links to which sit waiting in other files. And in this way the vestiges of experience become a weight rather than enrichment/curiosities to share. Who wants it to be this way? Could it really be so easy that building more organizing into the snippet gathering could allow me to focus on what I want to? In past months, it has been suggested that structure is not my strong suit. Especially for those of us who do not naturally lock into grid formation, it is essential to better develop habits to counteract our meandering natures, without quashing them.

And now it is twelve to 11, or 2:57/2:59/3:00/3:01. I had intended to be at the DIA by now, not for any specific exhibit but because I have NOT BEEN THERE ALL SUMMER, which is a most unfortunate first. And lordy, lordy, lordy, the prospect of the emergency manager's potential shortsightedness of AUCTIONING OFF Detroit's art museum is too much for me to wrap my head around (Unfamiliar with the peril facing the Detroit Art Museum? Check out Rachel Maddow's take on it, and on emergency managers in general here). So, off to sneak in a brief visit (along with more picture taking most likely, but they will be folded into useful folders!). And then. all going well, I'll also get to meet Javier there and we'll have a great night out in Detroit, (possibly Shangri-La?? Maybe movies...) 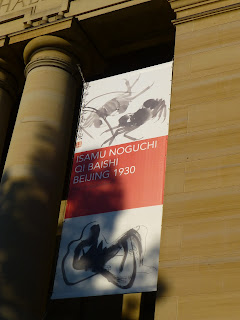 Tomorrow I hope to pay a visit closer to home, at the Univ. of Michigan Art Musuem, for a cool exhibit that's closing Sept. 1st. Last chance, local folks, sounds great!  A paired exhibit of the works of a Japanese American artist and landscape architect, plus Chinese painter, Qi Baishi. I'm almost certain I got to see some of his scrolls at the Shanghai art museum last year. UMMA is open from noon-5 on Sundays.

And awayyyyyyy we go!
Posted by M at 3:25 PM No comments: