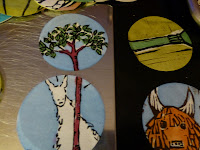 Javier, I got a new use for the circle cutter!

Reader, unlike prior years, when I had some lucky thing all lined up for the annual Circle of Art fundraiser, this year, I have been stymied. It sprang up! first of all, before I was ready! I noodled around for a bit, and then spent wayyyyyy too long in photoshop. The digital printmaking mash-up has potential. It has penguins and dubious invitations. And yet, it also aggravates me. Maybe a good sign? Alerting one to a new path? Hmmmm. In any case, it stands as it stands. Donation one.

And then! We have PART the SECOND, which started yesterday and came together this evening! Some cuteness, some airiness, coming up ahead! 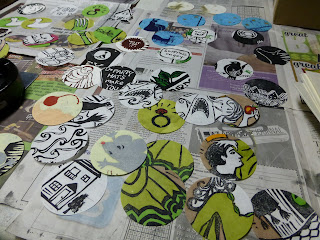 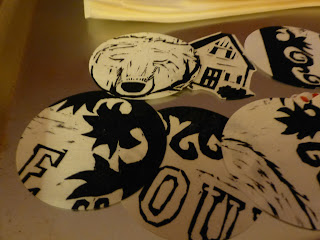 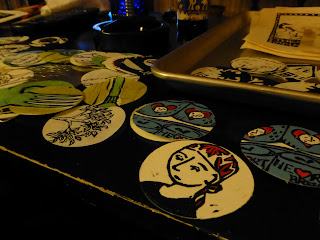 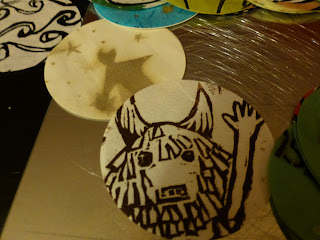 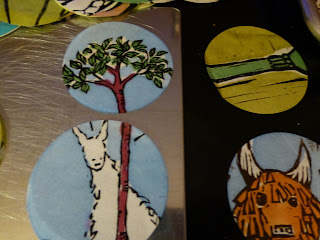 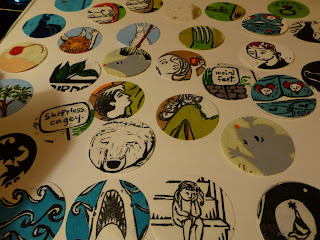 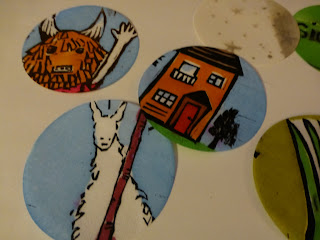 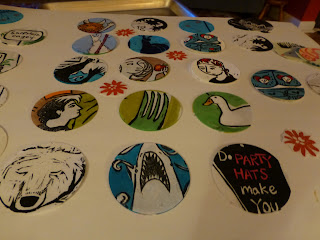 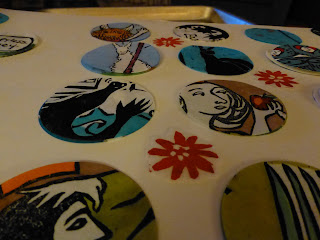 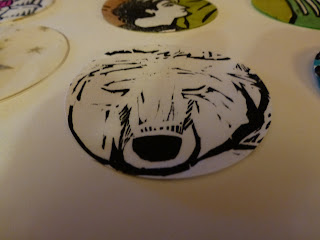 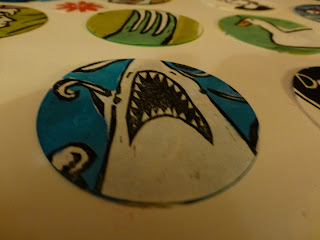 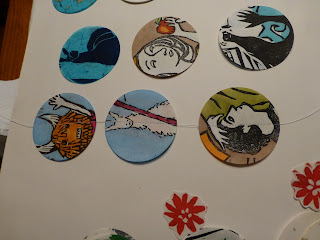 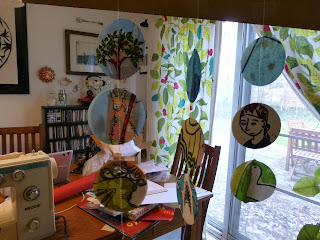 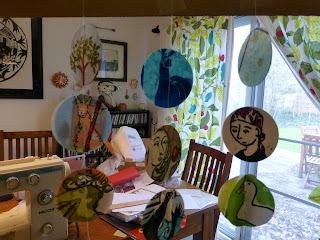 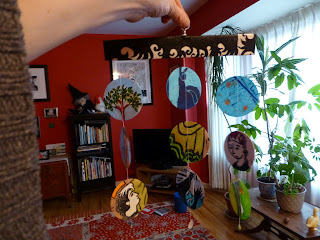 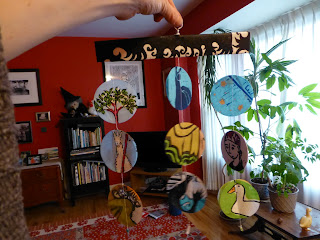 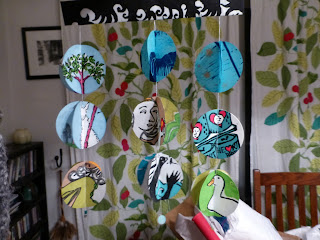 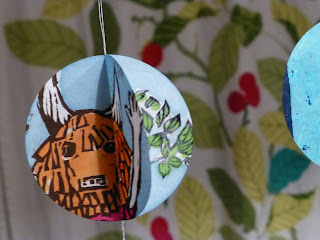 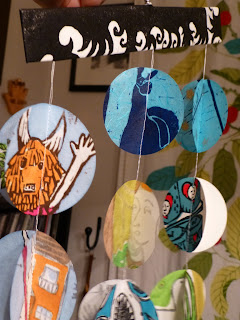 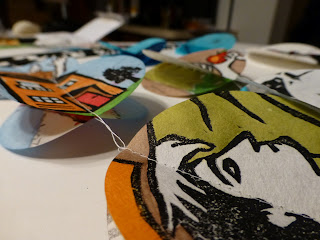 Well last night all I could sputter about was aggravated TV watching. But this also belies the crafty activity beneath the surface! My ****favorite local art open house**** is happening this very weekend! And following close on its heels is a very exciting lease at the groovy and socially savvy Yellow Door Art Market, starting on May 1st. So much to be done, so little time, throw a nasty sickness in there and ta-da! A minorly chaotic house. But. So. Ahem. First, the invite to this weekend's festivities: 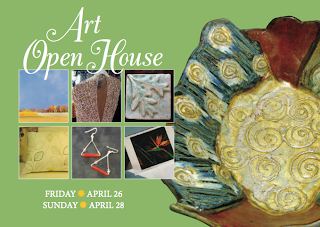 and...for local folk, here are the deets...In addition to my woodblock prints, you have a small and lovely selection of handmade goods, within a gorgeous home. Come, wander with a glass of wine, some nibblies, reconnect with friends...and check that Mother's day present from your list...Friday evening and Sunday day. 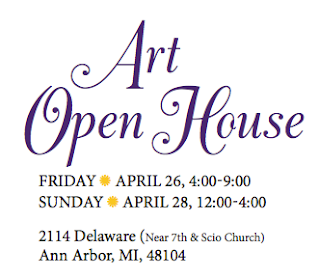 On my end, my newest plaything is a clunky button maker. Plus a small contraption that magically cuts perfect circles from paper. The latter is truly more impressive than it sounds. Zip, zip: circle. "I can't get over that thing!" says Javier, from across the table. Zip, zip! Circle! "I *KNOW*"I say. Zip, zip, Circle! Quite satisfying. Sadly, one does not need SO very many paper circles. But at least one needs a few. Am I making buttons? Nope! 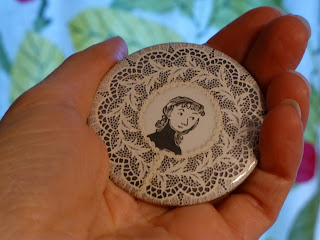 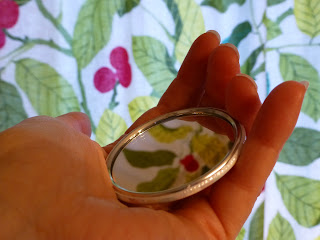 Hope to see some of you this weekend! Happy midweek, All!

A young girl, wrongly imprisoned in a mental institution because she knows her mother was the true killer of her younger sister, a freakish doll-child on the child beauty circuit! Will Dana Delany's Megan Hunt save her before electro-shock therapy zaps the adolescent's memory, forever hiding the true killer's identity?? ...The things we do, to salvage the day, eh? The TV watching, that is. You work, you go home and then you work again; you turn around, and it's 10 PM, the day's gone, how did that happen? It's not like you're a lawyer, or raking it in, or are changing the world.

Too late to start anything new, but at least you could cleanse the palate from the day's bad taste...but a faulty cleansing it is, the TV watching.  I'm not a snob, I get sucked into TV along with almost everyone I know, though I resent it. I think, outside of a few great shows, it's like cafeteria food, eating a little something, because you're mildly hungry -- or because it's the appointed time frame for eating -- and then eating a little something else, because that first thing you ate wasn't that satisfying -- and even then thinking, well, *that* didn't hit the spot.

That, to me, is habitual TV watching. It's the willful eating away of time, by one's own hand, because one was just *depleted enough* to not have the will to create something better with the day. Maybe a wee bit too puritanical on my point. Or perhaps too cynical... though it makes me think of Karl Marx's oft-paraphrased  "religion is the opiate of the masses" -- not that I know a blessed thing about that passage outside of that, but STILL, I say, STILL, plunk TV in there and doesn't it still work surprisingly well? I contend that it does... And on that note, I should go to bed. The young girl turned out to be a malicious killer after all! And wily and cruel; with the keen ability to ferret out emotional weakness in her targets, a trait clearly shared by the entire mentally unstable population, judging from years of TV shows. But luckily all truth eventually comes to light, and quite handily so, with time to spare for commercials...

You lack the skills of a Graphic Design Jedi

A.) How long did you spend on photoshop? 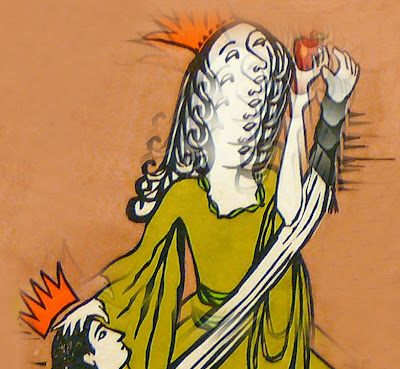 By in a Flash: a Few Snaps Before the Weekend


There's time for a scattershot post, no more. I could have sworn there was a misguided mildly uplifting quote about there being all the time you need, but a lax googling (see also: must hop in the shower) yielded a mere handful, plus crime story videos ("there's all the time you need"...in prison, to contemplate what you have done). "Making more time," however, yields an impressive 10.3 million in 15 seconds. And most of those are lies. As anyone living beyond the Phantom Tollbooth will tell you, you can't *make* time. But anything to free up space and make us believe we are creating a moment of calm, or stealing it, as the case may be, and we can be happier with our day...So. On with it.

Updates from the basement 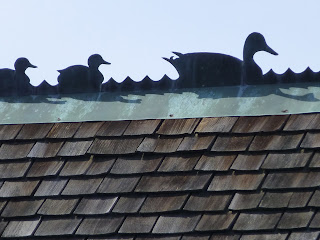 Happy Friday, All. Promises to be gorgeous out there, should be a fine night to view Luminaria at Foolmoon tonight and the Festifools parade on Sunday!