...Increasing attention from little one will, in theory, force me to reform my sporadically ridiculous eating habits. In the meantime, it is 4:12 on Monday, October 26th: high time for a picture book progress post! Quickly, quickly, as la Bebe will be transferred back to my care shortly. She looks like a wee gymnast in her floral navy onesie and she is covering impressive floorspace with an aggressive commando crawl. She would happily pound this keyboard and lick my monitor, but will also initiate the grand back arch of protest if kept on one's lap for too long. So, here we go -- just listed on Etsy: 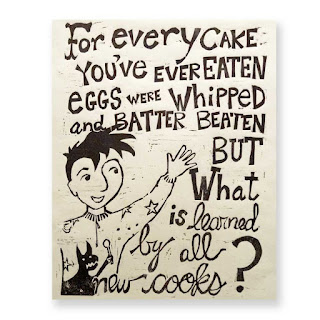 Pages 18-19: You saw this being carved (plus maybe a test print?), but here's the final version of "Quimby Lay Awake..." This is an eensy tiny edition, but I must confess I'm rather of fond of this one. 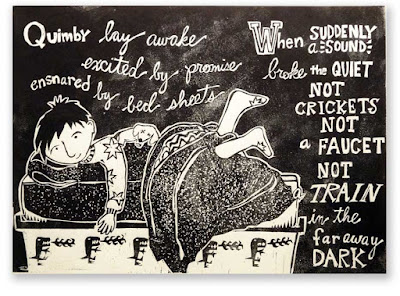 I wanted it to capture some of the magical surreal quality of nighttime wakefulness as a child. I always get a kick out of playing around with the lettering and I think the words troop across the page pretty well.

"This print marks a pivotal scene in my Cakeasaurus picture book: the fateful night where monster-in-search-of-cake meets five-year-old to be. Cakes have been disappearing for months now! Despite all precautions, the townspeople experience ongoing cake deprivation. The situation is untenable. And here we are: Cakeasaurus outside, Quimby within."

My keen desire to sidestep departmental meetings notwithstanding... 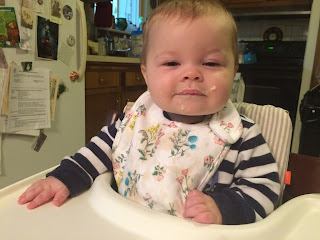 Thank you for coming, it's great to see so many faces here. I have called this meeting today because now is a time of much needed change. I hope to provide a positive springboard to address everyone's concerns and to make certain that the changes we implement will be both embraced and contribute to a strong foundation for our continued growth. 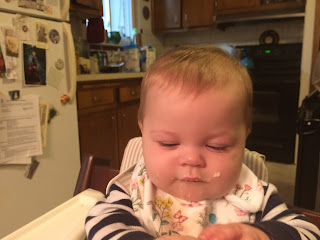 First, it has come to my attention that there has been much "watercooler" discussion about the wholesale movement of tall furniture in our department, followed by, shall we say, migrations of individual pieces, without obtaining approval through official channels. I don't want to dwell on this behavior, other than to say that I need to be cc'ed on all such proposals going forward; I should not have to point out that while I will soon be fully mobile, I am not yet. And in order to oversee the daily workings of this organization, I need to be aware of all facets of our physical environment. Preferably by gumming, as this has been deemed the best judge of character. 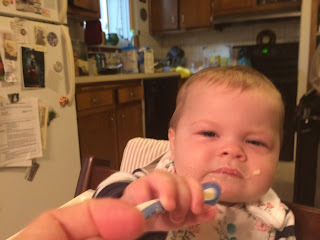 And moving on ~ M, you're out of turn, as well as invasive. Again, we are all part of a team here. We need to foster communication -- ideate collectively -- and from this we will draw the optimal road map for our future. If we each independently decide to make these little detours, they are just that -- they fritter away energy without advancing our larger goals. M, I will hold your scoopy rod until the next break. J, please hold your questions, while I take an initial read. 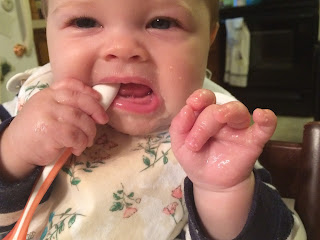 Long end more trustable than scoopy end (but also: gaggy). Does not melt from saliva bath. Lower chewability than giraffe; still affords pleasing resistance. Surface-bangability, but easily leaps to the floor. Taste: dairy-reminiscent, with displeasing foreign trace notes. Color does not affect experience...Speaking of detours! This is a perfect illustration of their hazards: my focus has been completely altered. Let's reconvene tomorrow: until then, consider what you feel to be the most important building blocks for our near-term future. Get creative! Blue sky thinking! Powerpoints permissable if narrated in sing-song.
Posted by M at 1:53 PM No comments:

Yesterday was a fruitful printing day in my friend Val's studio -- so fruitful that the tiredness still radiates across the span of my back. I usually feel all-over tired these days as a new parent, but this carried it to a different level. Overdid it? Possibly, but take studio time when you can get it, best to push through a bit, right? I neglected to take pics, but I must say I'm RAWTHER excited about the design I editioned, "All Good Cakes are Born from Books." Simple but pretty nifty! Cakeasaurus doesn't quite believe it, however. You'll see. They're strewn all over the studio, drying, along with myriad partial prints for cards (birds! houses! candle-shining cakes!).

I was able to studio, courtesy of Javier's weekly Bring-Baby-to-Work day, which so far has been working for all involved (any baby malcontents are, naturally quiet). We try to exchange a few texts to help the baby-free person and yesterday he sent me this: 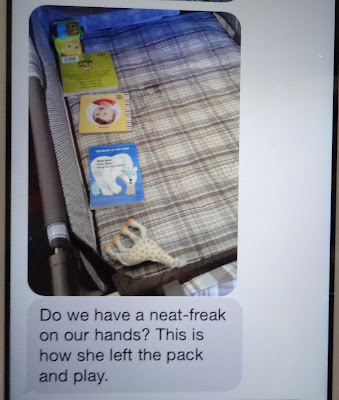 First of all, that would be laughable, as cluttery/jumbled as her parents are, but that would also be life, wouldn't it? It could merely be a function of her wanting to push things along, which she did until she quickly hit the edges of her baby pen. Sorry Baby, you must be contained! We hereby roll out the first of many, "It's for your own good."

But still, kind of funny, and what a fun time, to be anticipating which ways Baby will go. Personality-wise, as well as physically... And *how*, with all her engaged grabbiness and energy...the childproofing is daunting. Namely all the bookcases and CD cases which need to be affixed to the wall. Plus any eensy things which come into view and a little red sign flashes on in my brain: "choking hazard choking hazard choking hazard." Being a well trained consumer, when my environment feels most out of control, I turn to spending to make things feel a bit more reasonable. But it's for my own good, nay, for the good of the family! So anyhoo, I saw a small, sweet oak dresser that I think will be the solution for all the CDs in the dining room area. 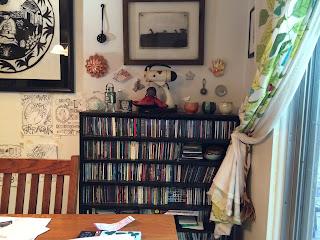 They're all residing in this, my only attempt at furniture making to date. 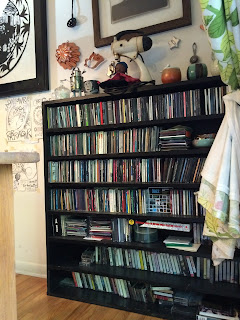 In case it's not obvious from the photo, it has a homicidal bent* and has been silently begging for toddlers for years, just so that it may topple over in a terrible clatter of sliding CD cases and befuddled wailing. Until now, a careful advance warning to parents of our house's baby non-compliance has been sufficient, but now I feel the black case redoubling its toddler luring power. On Dumpling's end, she's already clamping onto power chords like she's engaged in a tug of war the rest of us aren't privy to, so the time has come.**

*I built it to be kind, to be useful, to hold ever so many CDs

**Some would also argue that the time has come to go completely digital. "Oooh, that's so cute, you still have CDs!" said my doula this Spring. "No, I mean it's kind of sweet, you know -- quaint -- that you still have them!" She pursed her lips at them like they were a sea of down-at-the-heels Garfield stuffed animals. But I just can't do it. And if you are about to comment at the tapes at the bottom, I have two words for you: hush up. 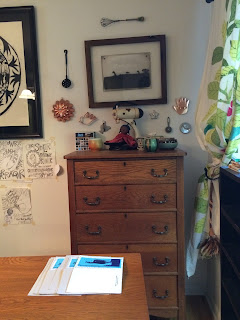 So here's the improvement. Ain't she swell? Much more self-contained and so much less topply! From the tiny-but-well-curated Annex of Pare Down on Dexter. Well. I will say that CDs don't fit in the top two drawers, so do allll the CDs fit? No -- but for that, I have some lidded wine boxes. Not perfect, but a work in progress.

And with that, I'm off to get outside//do some carving work in the basement. It has taken me almost a week to post this, but here's to baby steps! But not too soon~~