Museum Break Over, I Hear the Pagoda Chimes Ringing

Several weeks after I broke cover to check out "Indigenous Beauty" at the Toledo Museum of Art, I returned to reacquaint myself with its permanent exhibits. Wednesday's trip was a gratifying and luxurious solo jaunt. Surprising, too, in that while I vaguely remembered liking the museum from decades past (eesh), I didn't recall specific works. This, sadly, no longer surprises me -- but what did give me a jolt was the repeated experience of approaching a painting, recognizing it, and thinking,"Oh, I used to like this one." It was never with the excitement of continued pleasure, or familiar resonance, but only a past affinity, paired with its present lack. Odd. I stood before several of these, trying to puzzle out why they reached me before no longer held appeal. One was an El Greco -- I realize the absurdity of jill schmoe blogging,"But seriously? El Greco isn't all that~"...but nevertheless I stood before it (and others) only to be nagged by an odd wonder.

Where did the connecting threads go? We know that tastes develop and our life experiences impact us. But to what degree? How differently was the younger M fueled? If you were to ask me whether my visual artistic tastes have changed *significantly* over the years, I would have said no; but this experience stands in opposition. But maybe, too, it's the same thing as revisiting a novel and finding sympathy with characters who seemed unlikable or unneeded before; or becoming impatient with a prose style that once seemed masterful. The changing reader focus strikes me as right and good, so I guess it's less disquieting in that context.

That said, an unencumbered museum day is a lovely day! I wandered through galleries, running my phone battery down with excessive photos, while Javier texted me photos from his office, of Oyo hugging and touching a boy roughly her age, who looked confused, if not anxious. I wouldn't be surprised if the future little girl strides up to peers, telling them: "Hello! We're friends." 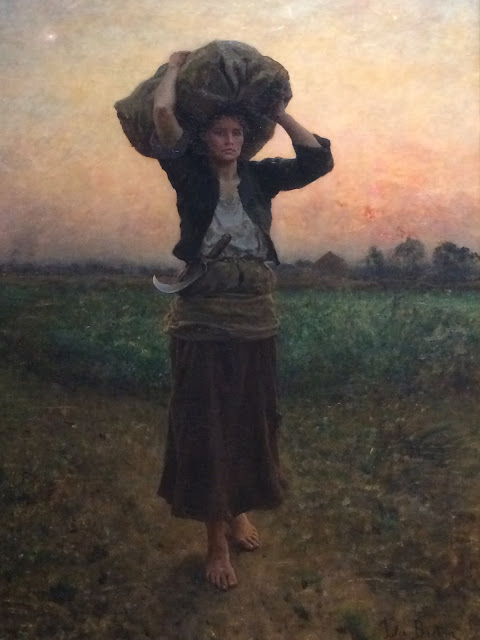 An Idealized image, sure -- but the quality of light, her erect bearing and beauty, the curved metal blade completely believable. I love all of it. A French painter depicting agrarian scenes from his native region. From museum label: "Breton's paintings present a romanticized view of the French peasant as the heroic embodiment of a traditional, idyllic, and noble way of life." As always, much more enjoyable to watch someone carrying a sack of potatoes while barefoot, than to actually do it. 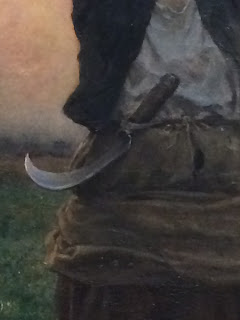 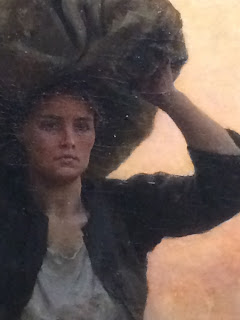 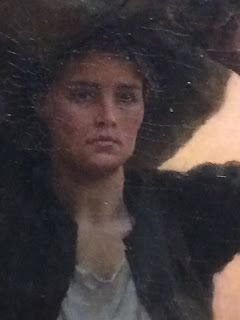 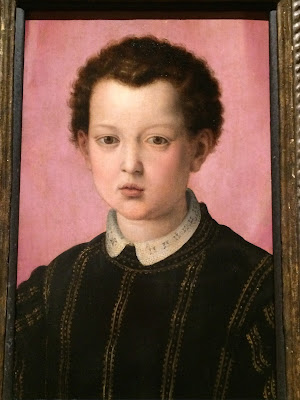 A 1500s portrait of a child that looks like a child. It is impossible to go museuming without seeing creepy children on the walls. Wooden children. Strange little alien children. Possibly happy children, but weird, skewed, off. Babies with elderly faces** and plank-like elongated torsos; babies and children that clearly predate the modern conception of childhood.

But here, Don Giovanni, son in a prominent family, looks solemn -- already weighed down by some adult-sized responsibilities -- but look, too, at the soft roundness of his cheeks, his bow lips. I could see him spouting some adultish remarks before doing something contrary; or running off in fear of punishment. Do you see what I see?  Museum label tells us that he was destined for the church at 7 by his parents; admitted to the clergy at 8 (reputed time of painting). Made a Cardinal at 17, and dead from fever by 19. So, take a moment to bask in the child's beauty, where there was not much childhood to be had; and this from a very privileged family.

Bronzino, a Florentine mannerist painter, served as the court painter for Cosimo I de Medici, Grand Duke of Tuscany, starting in his late thirties. If you're like me, his most famous painting is one you know without knowing you do: 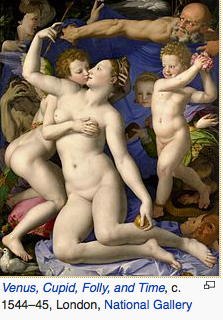 3. And now for something completely different. This doesn't qualify as a favorite in the same sense as numbers 1&2 -- it doesn't resonate -- but its stunning ostentation stopped me in my tracks. I leave you with the...
Pagoda Organ Clock
see also: Too Much Money, What to Do? 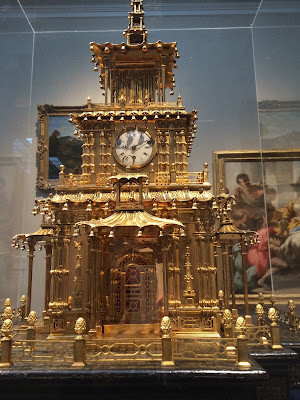 TMA tells visitors this British clock from the 1780s reflects "the popular taste for Chinese design...a pipe organ inside played exotic tunes while tiny ships sailed across the landscapes on the sides of the clock. Bells struck the hours and quarter hours." My first thought was that this would have been a blast to play around, to construct stories with diminutive dolls. On second thought, however, such a mansion to house such a clock would likely have a nursery floor, much less ornate dollhouses. But myyyyy goodness, such golden intricacy! Did the homeowners order this specially, after a trip abroad? Or did inspired clockmakers construct them and bring them to prospective customers? Were servants in awe of it, or did they loathe its need to be dusted? Or possibly under glass even while new? Curious for backstory. 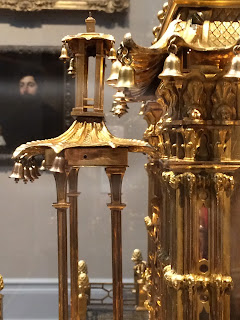 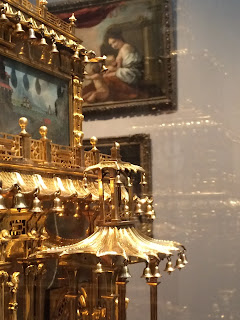 In terms of cultural misappropriation, the museum's website noted the misconceptions flew both ways, as wealthy Chinese bought these European-made clocks: "The Chinese viewed these chinoiserie clocks as typical examples of European manufacture and taste, whereas the Europeans misinterpreted the Chinese enthusiasm for them as testimony to their 'Chinese' qualities and appropriated them as decorations for fashionable chinoiserie interiors."

*Edward Lear actually a painter by profession!
**Yes, that DOES happen all the time, in life. but no, these would be babies remarking, "I told Ezekiah not to go into the barn," and "Twenty years hence you shall burn and in the burning, be reborn" and "Mother, separate me not from my twine; and do not gawp so."
Posted by M at 1:17 PM No comments:

Things to do instead of that art exhibit application with imminent due date:

Suspicious silence from the far end of the kitchen. The Oyo has been alternately impersonating a keening vine and a mathematician absorbed by a new theorem discovered on the floor. In the quieter moments, I have been cutting up brussels sprouts and tossing together ingredients for muffins which optimistically promise to make 6 adult portions and 6 baby portions.

It's a relief to listen to weekend NPR without a layer of screaming or low-grade whining. However: suspicious. I kneel down to peer at Oyo through the legs of the dining room table and there she is, all limbs wrapped around my hard foam...back thing? What would you call it? Like a pool noodle, but thicker, shorter. I roll on it to ease out the kinked up muscles. So anyway, she is seated, and wrapped around it in a double-hug, as if it were exceedingly precious, or desperate for escape; and is studiously gnawing at it. Somehow I needed the visual to hear the quiet grinding. Intellectually, I am aware that babies eat anything, but unfortunately my emotional side will arbitrarily decide, "Oh she wouldn't eat that~~" Oyo glowers at me as I extract a long sliver of blue plastic from her mouth. A few minutes later, she is hiccuping, and I can't help imagining some smaller blue particles lodged further down.

The muffins are eventually ready and I settle us down for the rare fully shared meal. She's not thrilled with the brussels sprouts, but will eat them; and she watches me eating mine. The muffins, however, mark the lowpoint for both of us. She is the first taster -- and tends to wolf down any carbohydrates -- but she lets the first bite sit in her mouth as she experimentally darts her tongue around. My experience is not much better. Healthful and they freeze well! Well. Do I freeze these, for her to not like them in the coming weeks? What kind of adult would eat this cardboard? Zucchini, fine, cheddar fine, end result: bleh.


******
From Wednesday's Super Brief post, which didn't make it to the Finish Line

Etsy announced they will be redoing everyone's shop, I think primarily to make it more mobile friendly, so the image slots are different, the shop home banner dimensions are different, blah blah blah. I am somewhat thumble thumbs in Photoshop, but here's what I have been working on:

Darker, broodier, mysteriouser. Possibly too dark, and yes it's pushing the limits of busy... That said, I'm geeked!  It reflects where my visual work is now.
Posted by M at 8:06 PM 1 comment: